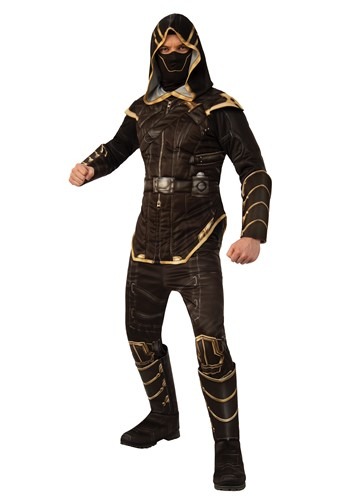 If you thought that Hawkeye was a nice guy, then think again. He used to be the kind of guy you'd let babysit your kids, but ever since the events of Avengers: Infinity War, he has a pretty big chip on his shoulder. He's ready to take the fight to any bad guy on the planet and not nice, like before. This time he's packing more weapons, more attitude, and most importantly, a brand spanking new costume. Just look at that outfit! It's enough to strike fear into the heart of any baddie.

Yes, Hawkeye is now sporting the "Ronin" outfit in Avengers: Endgame. The Ronin costume appeared in the comics, worn by various characters. Clint Barton was the most notable character to take the mantle in the comics and he's following suit in the Marvel Cinematic Universe! Of course, you could be the next person to take on the role of Ronin when you wear this Avengers: Endgame Hawkeye Costume for adults!

It's your turn to take on the role of a superhero with this officially licensed costume. It comes with a black jumpsuit that has plenty of printed details to recreate the look of Hawkeye's armor from the movie. It has gold graphics to help give an ominous aura and the hood and mask help you conceal your identity as you duke it out with legions of villains. The legs even feature boot covers, so you can wear your favorite pair of shoes with this costume while maintaining a heroic look from head to toe. The only thing missing from this outfit is Hawkeye's signature bow and arrow!

If you're ready to join the fight against Thanos, then you're going to need the uniform of a hero! This Hawkeye costume has you fully covered... just make sure you pick up one of our toy bows or swords to accompany your new look.