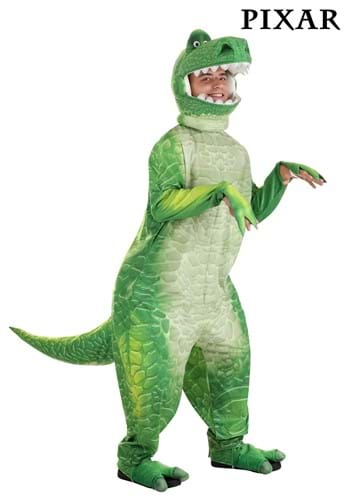 Do you ever wonder what the characters from Disney and Pixar's Toy Story were all up to before they found their home in Andy's room? Sure, we know that Buzz came from the Space Rangers and Woody had his whole gang of western antics. But the Potato Heads didn’t come from Idaho, and we can’t imagine that Slinky Dog was formed when a Dachshund collided with a classic 80s toy while rushing up the stairs.

Of all the characters, though, we're most curious about Rex! History tells us dinosaurs roamed the Earth around 65 million B.C., which we assume means “Before (Toy) Chest.” So, there's a lot of story to be told in this timid but terrific dino pal!

Help us expand the story of the adorable dino when you buy this Adult Deluxe Disney and Pixar Rex costume from Toy Story. This Made By Us design blends plushy fabric with fiberfill stuffing to bring your favorite Disney dinosaur to life. The complete ensemble begins with the Minky jumpsuit, featuring an all-over print that replicates a scaly hide.

Padding on the hips gives you the bulk you need to really wag the attached tail. Sculpted boot covers and attached mitts create Rex's claws and you'll top the entire look off with the stuffed hood, designed to look just like Rex's grinning dinosaur face! All that is left is for you to tell the tale we've been waiting to hear.