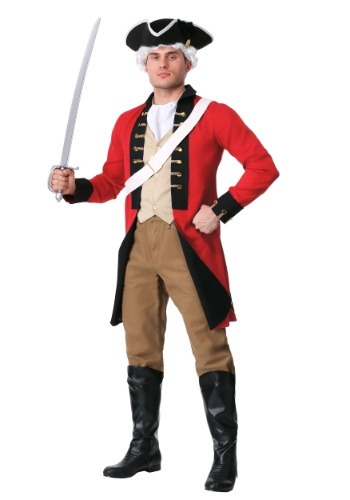 When you're fighting for one of the most powerful monarchies in the world, you might not think anyone has a chance. After all, the Brits had the ships, the men, and the highly caffeinated tea. Who can stand up to that? The thing is, any nation can stretch themselves too thin. The British Empire was one of many nations to realize that one government can't rule the whole world. If you want to do the Redcoats a favor at your next costumed event, do your battalion a favor and pick your battles wisely. Don't get mad at that guy who cuts in front of you in traffic, no matter how tough you look in your smart red jacket. But you could totally put your two cents in when two blunderbusses are arguing over musket brands, that's a battle that a soldier like you can win!

Our in-house designers created a quote the dashing, historically inspired look with this British Redcoat Costume. The long coat's front is framed with a black collar with gold buttons and braid on the sides. The collar matches the cuffs for an official style. The look is pulled together with the attached tan vest that buttons up at the center-front, and with a white cravat that fastens around the neck. Layer the chest belt over the jacket/vest combo and wear it with your own pair of white, tan, or gray pants for the full ensemble. Then, just pull boot tops over a pair of black shoes and you'll be ready to represent the British Empire!

Redcoats might not get a lot of play in today's media but we think this look is ready for a comeback. There's no need for them to support colonialism, they can simply represent everything we love about Britain. Like the British baking shows for instance, is there anything more admirable than a polite reality television show? We don't think so. Invest in a powdered wig and a prop scabbard, British invasion is back by popular demand!