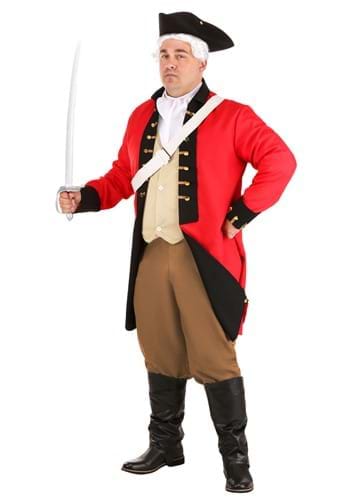 Well, then, just step right up good sir! We're quite happy to offer you this British Red Coat Plus Size Costume as a fun facsimile of the military garb worn by historical British soldiers. Whether you fancy yourself as a loyalist colonial chap or a proud citizen of the British Empire, there will be no higher calling than taking up arms for your King. And with this detailed costume, you'll be able to perfectly play the part!

Made By Us, our in-house designers created a quality, dashing look with this British Redcoat Costume. It comes with the pictured jacket/vest combo top, the cravat, chest belt, and a pair of boot tops (pants, wig, hat, and prop weapon sold separately). The long coat's front is framed with a black collar with gold buttons and braid on each side and on the cuffs, recreating the style and appearance of traditional 18th-century military uniforms. The attached vest front secures in the front with buttons up the front and a cravat is secured at the neck. Slip on the white chest belt and boot tops and you'll be ready to represent the British Empire in combat (or perhaps just at a drinking hall!).

If you're a diehard historical re-enactor, this costume might not be what you're used to. But, for everyone else, it's the perfect costume facsimile for fun! It'll work great for a historical play and it would be great for group costume theme with a buddy dressed up as George Washington. We do, of course, have our exclusive version of that costume available here on our site, too! Be sure to shop all of our Colonial Costumes to see the top-selling selections.