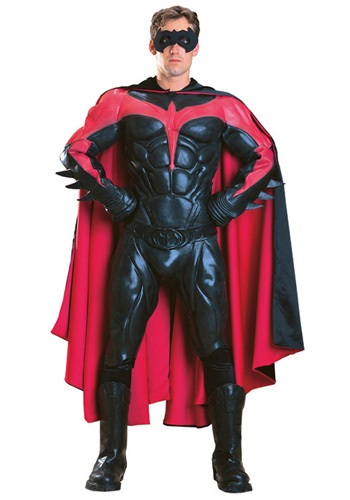 So you just moved to Gotham City, and you’re hearing a lot about this Batman guy. You’ve seen some of his handiwork, and you gotta say, you’re pretty impressed. We know what you’re thinking, you’d love to be that guy’s sidekick, his backup as he cleans up the streets for all the good people of the city you now love.

There’s only one problem: Batman works alone. Luckily, you have a couple of options if you still really really want to get on his (usually) one-man team: you can have your acrobat parents get murdered by one of Batman’s nemeses (but this seems pretty gruesome, and besides, your parents are peacefully enjoying their retirement in Boca); you can use your super sleuth skills to figure out that Batman is really billionaire playboy Bruce Wayne (but, you don’t have super sleuth skills...you work in IT); or, you can wear this Adult Authentic Robin Costume and fight crime on your own until Batman brings you under his...wing. We think the last idea is the best one. In this officially licensed Robin outfit, you’ll feel just like the Caped Crusader’s apprentice every time your black cape flows dramatically behind you. This suit has foam muscle armor pieces (to accentuate how much you’ve been hitting the gym lately), and the bright red emblem across the chest will make sure that Batman himself will notice your arrival on the scene.

We’re sure that in no time at all, you’ll be brought into the famous Batcave, introduced to Alfred, and be allowed to sit in (though never actually drive) the Batmobile. You can thank us later, after you’re done saving the city a handful of times.