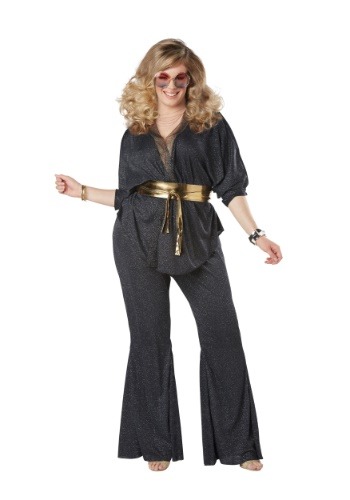 Got Disco on the mind?

Maybe you've always been a throwback minded kind of lady. Or maybe you just love the appeal of the alluring Disco scene from that crazy era of the 1970s. But if being stuck in the 2010s has ever made you feel like there's an impediment towards you getting your disco on, well, let's throw that excuse out the window. Cause, with this costume, you can become the Disco Dazzler!

The Disco Dazzler has the flashiest moves at the discotheque, and she totally dresses for the part, too. Which is why this women's costume is so outright fantastic. Styled as a blouse and bell bottom pants combination, this costume also comes with a gold foam belt. Dazzling! The polyester fabric of the costume has a glitter finish that makes it appear almost iridescent. When you move out on the dance floor, you're sure to shine. Double dazzling!!

This Disco Dazzler Plus Size Costume is ready for your next 70s theme party, or to bring a throwback theme back into prominence this Halloween. Can't decide who you're going to cut a rug with at the party? Team up with your friends in Disco costumes for a great group theme, and maybe you'll even be able to teach them a thing or two. After all, you do have all the right moves. Because you're going to be the Disco Dazzler!