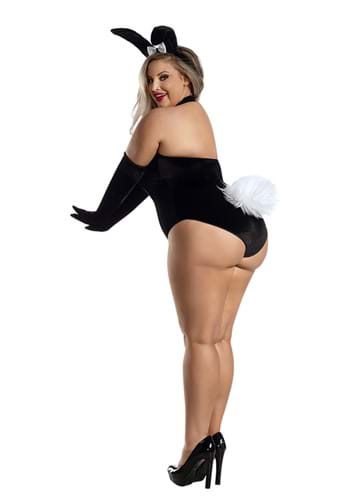 Bunnies. They're the most epic party animal out there. They are in the most iconic photographs. They meet the most celebrities. Have you guys seen how classy bunnies move and shake out there? Who knew bunnies were so ambitious?

Before a certain smoking jacket-wearing gentleman opened up his clubs, rabbits were simple creatures. They were destined for a life in sunny fields, nibbling on green grass and hiding from hungry coyotes. There's nothing wrong with that but there were certain bunnies that wanted more. They wanted bright lights. They wanted to toast with the famous and fabulous humans of the world. Getting around via limousine rather than hopping would be pretty nice too. Are you ready to take on the role of bunny gone glam? This gorgeous costume will set you in the right direction. Riding in limousines and toasting with celebrities? Well, that's up to you!

This luxuriously soft bunny costume features a black bodysuit with a fluffy bunny tail perched on the behind. The high-neck bodysuit has a cheeky collar at the neck, topping off a keyhole threaded with satin ribbons across the chest. A pair of long black gloves add a touch of sleek class to the outfit and making your costume ready for posing. And of course, the costume is topped off with a pair of poseable rabbit ears. Ready to move up in the bunny world? This ensemble will make you ready for the limelight!

Bunnies are one of the only animals that have their own celebrity pedestal. Complete this classic look with a pair of fishnet tights and timeless black heels. Whether you're heading to an epic party at a mansion that we won't name or simply going all out for Halloween, this is sure to be a costume you'll never forget!