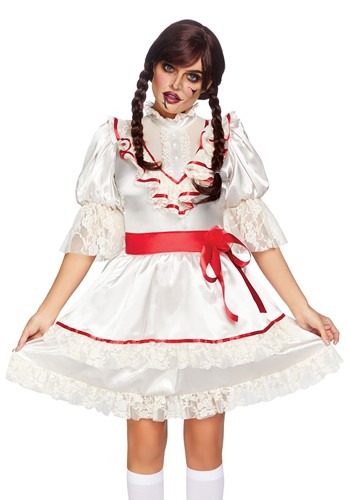 Dream a Little Dream of You

Abby thought her reoccurring nightmare had to stop... well, reoccurring some night soon. How often could her mind return to the nightmare doll her grandma had given her when she was a kid? She had been creeped out by the fancy china doll as soon as it was out of the box. There was nothing wrong with it. It had perfect, curly ringlets. She wore a lacey party dress and was held up by a sturdy brace that was fitted around the back of its neck to keep it standing. But when Abby used to look in the doll's blue glass eyes she saw something dangerous, hateful in the blank expression. So as soon it was possible without being rude, Abby boxed up her fancy doll and stuck it up in the attic.

But now, years later images of her china doll are coming to her in the middle of the night. Abby made a note to stop watching scary movies and as she settled down into her covers, she heard it. It was the unmistakable pitter-patter of China doll feet. They were coming fast. They were coming for her. You see, there are some problems that you just can't run from!

This costume looks picture perfect with the lush layers of fabric you'd expect a china doll to wear. It zips up the back through the red sash at the waist and the sheer backing. The high-waisted bodice has a high neck that's trimmed with ruffled lace and puffed sleeves. With a look as innocent as this one, we wonder how anyone could suspect evil coming from this fragile little doll.

Want to play up those less-than-innocent looks? You've got options! From the broken doll makeup kit to white thigh highs and wigs that sport babydoll curls, you'll find your characters comes to life, piece by piece, for better or worse.