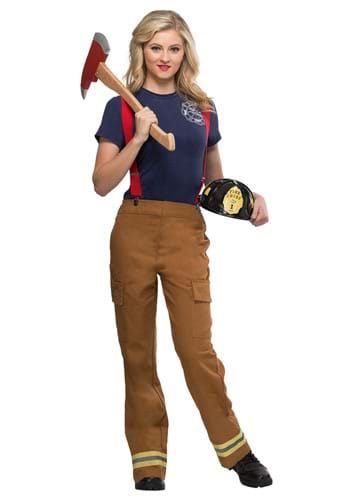 Here's the scenario: you're coming home from a long day of running errands and you see that a house on your block is currently a blaze. Orange flames shoot out from the windows and a massive black cloud of smoke looms over the house, indicating the troublesome situation. You're the first one to arrive at the house engulfed in the fire so you're faced with the daunting question: what should I do? After all, this is you we're talking about here; you're fearless, courageous, and strong. You don't back down from anything, not even a potentially-perilous house fire. You unbuckle your seatbelt, hop out of the car, and run into the house. There are people who need saving and you're just the girl for the job!

Although, wouldn't this hypothetical scenario be a smidge easier if you were dressed for the occasion? It's pretty uncommon to have a flame retardant suit in your back trunk, but this fire captain women's costume would come in pretty handy. Not only could it be worn to fight fires* you incidentally come across, but it's also convenient to wear on Halloween if you want a look that's more commanding than creepy. It's perfect for confident ladies who are bold enough to literally run into a burning building whenever the opportunity presents itself!

You'll appear to be a fire-fighting professional once you're outfitted in the Fire Dept. tee, cargo pants, red suspenders, and fire chief hat. Just pick up an axe accessory to offset your daring personality and you'll look prepared to chop down the costume contest competition or chop your way into a burning house!

*Costume should not really be worn to fight fires

Product Reviews   Write Review3 Total Reviews
TOTAL CRAP - DO NOT BUY
By Current Customer / November 1, 2019
There's "sizes run small" and there's the absolute failure of a costume that was produced here. If you're adamant about buying this one, buy three sizes up, and if you're a taller girl (L or XL), pass entirely.

The fabric is ridiculously flimsy and weak. The top, which claims to be a large on the tag, is small at best. It may pass as a medium if you're wearing it as a crop top, which is not how it's advertised in the picture.

The pants are paper thin with ridiculously poor stitching. My wife put them on, turned to look at herself in the mirror, and the seam down one side ripped, creating an irreparable 4 inch hole. She ended up ditching the pants and wearing jeans instead.

The suspenders are ridiculously poor quality and come attached to the pants. They have clips, but don't actually stay clipped to the front of the pants. The slightest motion causes them to slide right off and just swing around.

The only good part of this costume was the helmet, which was also the only part that both functioned as expected and fit properly.

If this was the only thing I'd ever bought from this site, it was such a negative experience that I'd never buy from here again.
Was this review helpful to you?YesNo
Five Stars
By Current Customer / January 26, 2019
Was this review helpful to you?YesNo
Great customer service
By VJ / November 14, 2018
i enjoyed the experience purchasing a costume through HalloweenCostumes.com.

the return process was not that complicated.

wish there were local stores where we can go and try on the costumes, so i did not have to return mine twice (once too big, once too small). Hopefully the one i received is the right size now.

overall experience good.
Was this review helpful to you?YesNo
Get 20% Off