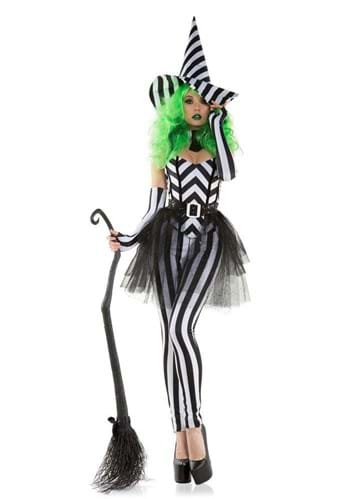 Someone to Call On

Yes, sometimes you have to call on a friend from a low place. Like, the lowest of the low. Like... the underworld, for instance. That friend might not have a "wine guy" but if you're dealing with a home infested by living intruders or trying to shake off a nasty curse, well that low friend is going to be there for you. They might ask a high asking price. But nothing's for free, right?

This Betel Witch Costume has all the elements you might want from a ghost with the most mixed with classic witchy vibes. It includes a black and white striped corset top with hook and eye closures down the back. A tulle skirt attached to a sparkly belt secures around the waist with a hook and loop fastener for a fun and flirty touch.

Striped pants with an elastsic waist band slip on under the skirt. Complete with jersey knit fingerless gloves, a playful collar, and a show-stopping witch hat, this costume will make you into one of the most helpful villains to call on this Halloween season!

People won't have to ask your name before they know it when you show up in this costume. But once they say it, they better watch out. Say it three times and they're sure to get more than they bargained for!

This Betel Witch Costume includes the following: a corset, leggings, a belt with attached skirt, a hat, a neckpiece, and a pair of gloves.
Answer
Ask a Question
Reviews
5
(1 Review)
5 Stars
100%
4 Stars
0%
3 Stars
0%
2 Stars
0%
1 Stars
0%
Write A Review
Sort By Most Helpful
Filter By All Ratings