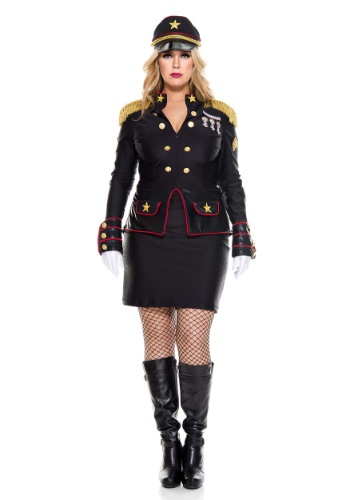 Are you capable of command? Are you willing to lead the young men and women of your country into battle? Are you ready to do what it takes to come out victorious?

Then there's really, basically, only one course of action for ya. You've got to become a Military General! And, fact of the matter is, we don't have time for you to ascend the ranks of the Army, Air Force, or Marines in a typical fashion. Nope, we need to get you into a command position ASAP. Because the world is counting on ya. What, oh what to do!?

Of course the only course of action is to just start with this plus size Military General costume. It's ready for success, even when your mission just calls for a round of drinks on Halloween night. Command the attention of the room and help whip all recruits into real soldiers when you go in this terrific costume.

Styled as a long-sleeved top and skirt combination, this uniform costume will have you ready for success. The top features gold buttons and stars, red trim, gold fringed epaulets, and even embroidered combat medals so you look real deal official. The costume set includes hat and white gloves to complete the look.

Add your own boots, and we're sure you'll be ready to lead your forces to victory. After all, we're all counting on you to lead us in having a successful Halloween night! Ten hutttt!