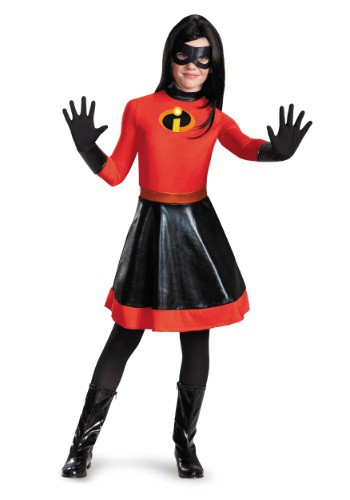 Violet has a tough life. It isn't enough that she has to be different from everyone, having bizarro super powers that no one can know about. No, she also has to deal with two pesky little brothers on top of that! If it's not Dash speeding through her room when he thinks she's not there, then it's Jack-Jack, who can pretty much turn into a little tornado of death whenever he likes. And then there's her parents. How on earth do you tell anyone about them? It's hard enough that you have to live up to the pressure of being the daughter of Mr. Incredible and Elastigirl. But bringing a boy home to meet them? It's unthinkable.

Ugh, boys! Why are boys so difficult and so hard to understand? It's no wonder Violet turns invisible, because sometimes she already feels invisible. Pretty meta, right? Yeah, that was kind of the point. But Violet doesn't need to worry about that anymore (and neither do you!). Now that she's found out how great her powers are, she doesn't need to worry about hiding. She can be proud of who she is and what she can do. And you should be too. Sure, her family is still a little bit... weird, and little brothers are always going to be pests sometimes, but as for Violet, she's a smart, capable girl who can do the right thing when the pressure's on. Maybe you can't turn invisible, but you've got your own hidden powers. So suit up as Violet and show people what you're made of, Invisigirl!