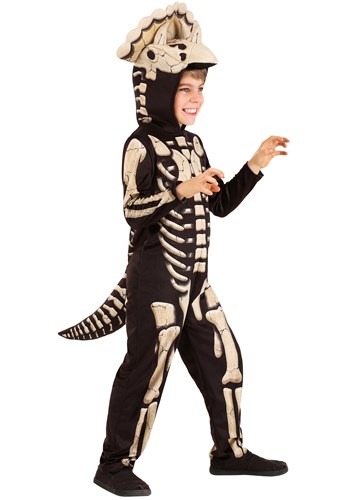 Fossils are amazing. To think that the skeleton of a creature that existed nearly 68 million years ago could still be around to this day is mind-blowing! We can see what the Triceratops looked like and we can make a pretty good guess about how it lived and what it ate. So then... why do fossils look sort of terrifying?

Just look at a Triceratops fossil some time. It sort of looks like something that would be in a horror movie for dinosaurs. Like, the fossilized Triceratops skeleton would be the final villain who's been hiding in the basement the whole time! Of course, that's precisely why most kids think that fossilized dinosaurs are completely awesome... and that's totally why your little one will love dressing up in this Made by Us Triceratops Fossil Costume for kids!

Our resident dinosaur expert worked hard and studied plenty of dinosaur fossils to get this Triceratop Fossile Costume just right! Combining the scary appeal of a skeleton and the colossal presence of a dinosaur, this costume brings both worlds together brilliantly. The costume comes with a black jumpsuit the has dinosaur bones designed into the exterior. The feet end in attached booties and the back of the costume even has a long bony tail, just like the real dinosaur from the prehistoric era. Finally, the hood recreates the look of a Triceratops skull and features sculpted details that will have your child looking a little like a museum exhibit!

Whether your child thinks fossils are kind of creepy, fascinating, or a little of both, we bet that they'll love tromping around the house in this exclusive Triceratops Fossil Costume for kids. Who knows... if you take them to the museum, they might just become the newest star attraction!