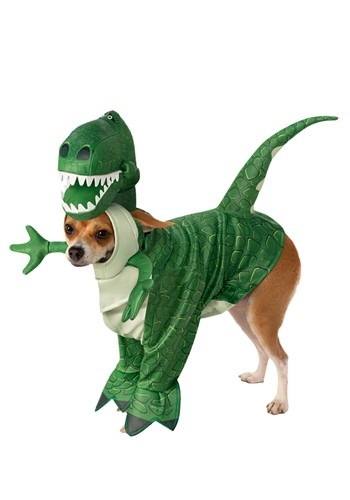 Traditionally, a T-Rex is a feared and awesome creature. The huge jaws and teeth make up for their hilariously tiny arms, and it's probably for the best that there aren't any around today. But in Toy Story, the toys have their own personalities, and all bets are off! This green dino toy may look like a terrifying predator, but every Pixar fan knows that Rex is a big softie (and sometimes a bit of a coward!). Dress up your pup as the beloved dinosaur in this Toy Story Rex Dog Costume and watch your new reptile play!

This polyester suit comes in two pieces: shirt and headpiece. The legs and tail are attached to the suit, while the arms are sewn onto the hood, so nothing will fall off during the festivities. The tail and arms include some stuffing to help them hold their shape. The Rex head is attached to a hood, which connects to the suit at the neck. With the hood design, there is less of a chance that Rex's head will roll off! With every limb in place, all that's left to do is sit back and watch with glee as your dog gets used to new arms and second tail.

Your dog is sure to be a main attraction wherever they go in this Rex Costume! Whether they are coming along to a costume party or helping to chaperone kids as they trick or treat, everyone will enjoy watching Rex trot along. Can you picture it? Those tiny feet click clacking? The ridiculously small arms flapping in the wind? We hope you get lots of great footage of your pet running about in this hilarious getup! Now, let's find Rex some treats, because your pup deserves it!