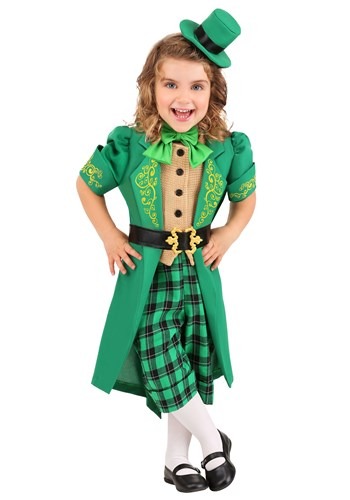 Gather round, toddlers and parents, because we know a thing or two about Leprechauns around these parts. For millennia, folks have been scouting after storms for rainbows, yanking shamrocks out of the ground, and otherwise emulating the Wee Folk of Irish legend. Their motivation? There’s something about a Leprechaun’s gold, of course. The treasures are so well hidden only the most esteemed and discreet Irish elders have a clue their whereabouts, but we know they’ve got them. We just know it.

The intriguing part of all this is that, apparently, capturing a Leprechaun and tricking it into accepting surrender means that you get a couple of wishes. We could wish for the treasure! And with our spare wish, we could ask for all the candy in the neighborhood! So, we have a theory: instead of all the trickery, the elders might be susceptible to charm! Enter this adorable emerald jacket, pants, and belt that would really bring out your little one’s charming personality. Of course, you can’t go wrong with a separate but matching green top hat, some tights, and maybe some nice shiny flats. Anything to ooze charm, you know? While we’re on the topic, by the way, we suggest also learning how to Irish stepdance.

The End of the Rainbow

Also according to legend: there’s something lucky about the color green. But we like to mitigate risk around here, and that means using every tactic in our arsenal. No relying on luck when it comes to treasure. So are you up for the charm challenge we have proposed? We think it’s a solid idea that could leave us all swimming in gold pieces at the end of some rainbow. And plus, your toddler will have a blast looking so good in this costume while we’re off pursuing riches. It will be their lucky costume forever and ever. They may never take it off!