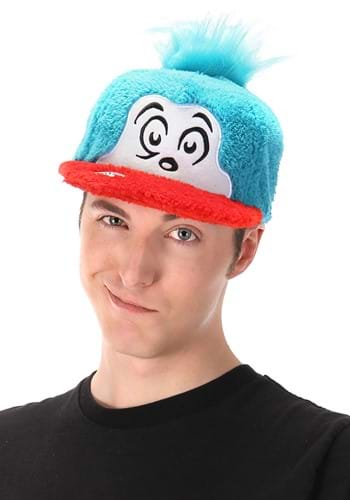 Cat in the Hat Family of All Things Patch Set
$7.99
Add

The Cat in the Hat Adjustable Earmuffs
$2.99
Add

The Cat in the Hat Fingerless Paws
$5.99
Add

The Cat in The Hat Lightweight Infinity Scarf
$9.99
Add

Imagine the mischief you'll get in while cosplaying as Thing 2. Oh, the things you'll do! When someone let's this cool Fuzzy Thing 2 Cap out of the box, hilarity will ensue!

We think there's something downright empowering about wearing something on your head. Don't you agree? ...Okay, okay, allow us to explain. A crown, a headband, a gorgeous and tasteful hat--all of it, any of it, we'll take it. Like, how do you feel when you have the opportunity to bestow upon yourself some new noggin ornament that attracts attention all the world over. It's nice to feel noticed, you know? And there's no better spotlight than the perfect headdress.

We're here to fix that with headwear like this officially licensed Thing 2 Fuzzy Cap. This sweet cap features embroidered facial features and a hook & loop fastener, so no matter how big your noggin is, it will take you from average, everyday costume party-goer to the most likely to cause some mischief. Snag some other Dr. Suess accessories to get a group theme going. See what we mean about their sheer versitility and power now? Ah, the power of a good hat.