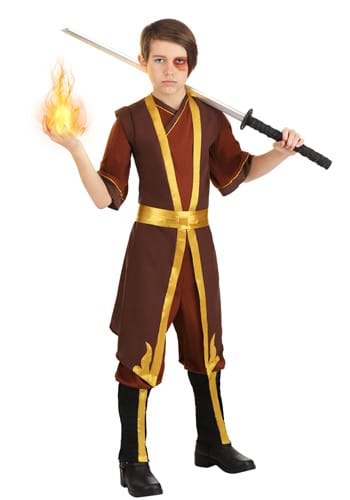 It turns out, Zuko is pretty good at giving advice. He might look like an angry, troubled teen, and yes, he hasn't always been on the side of good, but he eventually proved himself to be one of the most valuable members of Team Avatar. He helped Katara calm her desire for revenge. He helped Aang break through some of his fears, which let him begin mastering firebending. And Toph... well, Toph never got to some advice from Zuko on a side adventure! If your child has been cultivating the teachings of Uncle Iroh and wants to help Aang and the gang restore balance to the world, then they're going to need the outfit of a true firebender!

The Last Airbender Deluxe Zuko costume is designed to turn any kid into Prince Zuko. It comes with everything they need (aside from the wisdom of Uncle Iroh) to become the iconic character.

This officially licensed costume from Avatar: The Last Airbender starts with a jumpsuit that fits with a zipper in the back. The one-piece suit has a top that's designed to look like a vest over a shirt and it even has satin detailing. The belt is made out of matching satin. When your child has it on, they'll be ready for their next adventure with the Avatar crew. (We suggest teaming up with Toph to give her that adventure that's she missed out on).

This Zuko costume is perfect for fans of the Nickelodeon show, especially if they have a fiery attitude, like the Prince of the Fire Nation. It's also great for young heroes looking to find a new way to restore their honor. Just be sure to check out all of our Avatar costumes, so you can reunite Team Avatar for one more mission!