The Joker Death of the Family Groundbreaker 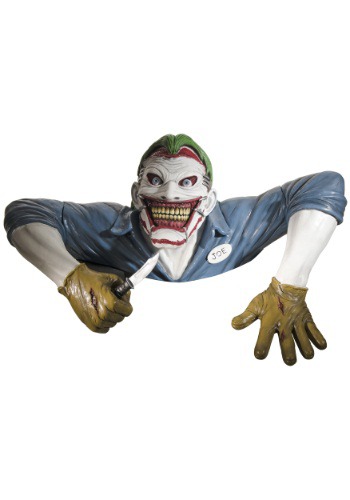 On everyone you face -- even the most hardened criminals -- the pupils contract or expand depending on emotion...but not his. His pupils stay fixed, tiny points of blackness, the eyes of someone who hates everything, everyone.

Batman’s a man with a lot of enemies. One of them is an 11 foot tall crocodile monster who eats people. Another has the technology to coat an entire city in madness-inducing toxic gas. Why, then, is a crazy clown with no remarkable powers or means his greatest foe? Well, as The Joker put it himself, look what he can do to a city “with a few drums of gas and a couple of bullets.” The Joker is nihilistic, unpredictable, cunning, and will do anything for a laugh. It’s what makes him laugh that’s so scary.

Joker has had a lot of looks since he first hit the Gotham scene in 1940, but few have been as unsettling as his appearance in Scott Snyder’s revered Death of the Family series. A zombie popping out of your lawn would be bad enough, but a psychopathic clown bent on destroying everyone you’ve ever cared about? “Now we’re talkin’!”