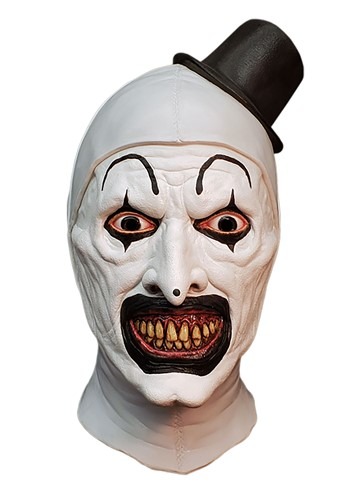 Games are Art the Terrifier's thing. We're not talking checkers, tic-tac-toe, or Simon Says, either -- though he could probably work those in somewhere. Lucky for you, and maybe not-so-lucky for everyone else, you don't have to be on the receiving end of those games when you sport this genuinely terrifying mask!

Art's filthy, rotting teeth and abnormally shaped head are represented perfectly here. This vile latex mask captures the creepy clown we all know and fear. Luckily, it's one size fits most and has small holes in the eyes and nostrils, so you'll be able to assume your role as Art the Clown without issues and in a snap.

When you wear this costume you'll strike fear in the hearts of the neighborhood. You can do more, though. Make sure you peruse the site for a matching costume, but also grab a big old black bag to carry around. Just to carry your candy, of course, but it never hurts to leave folks guessing about what's in there. Is it a bunch of candy corn? Plausible. Is it an amalgam of body parts? Who are we to say one way or another? Ominous. Just how we like it.