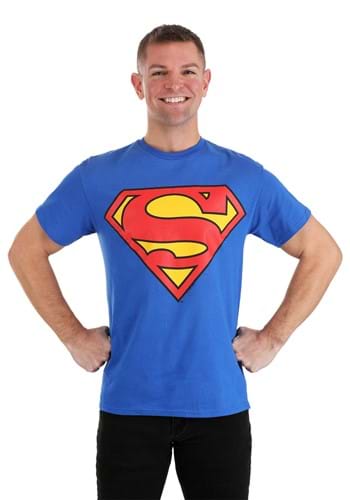 Is that a bird? Is it a plane? No, it’s a Superman Shield T-Shirt Costume! The Man of Steel. The Man of Tomorrow. The Last Son of Krypton. Whatever you want to call the original superhero, you can turn into the Justice League’s resident “boy scout” without ripping the buttons off your work shirt with this Superman Shield T-Shirt Costume! It’s a quick, easy and affordable Halloween costume everyone will recognize! That said, they’ll recognize you as Clark Kent, Kal-El, Superman. They probably won’t even know the Kal-El part. If you’re going to correct everyone and tell them you’re actually Cyborg Superman, Superboy Prime or Steel because they’ve all worn the same crest, you might want to put in a little more effort.

On Superman’s home planet of Krypton, the S design is actually the coat of arms of the House of El, his family. It depicts a serpent coiled inside a shield and symbolizes hope and strength through unity because Superman’s house is, of course, one of the ones that brought peace to Krypton by unifying it. Uh-huh. Looks a lot like an S, dude. You’re telling me that’s a coincidence?

This Superman Shield T-Shirt Costume is 100 percent cotton jersey knit. The blue shirt has the Superman S shield logo printed in red and gold. It’s officially-licensed, obviously. You think we could get away with that? It comes in sizes up to 3x to fit Last Sons of Krypton of all sizes.