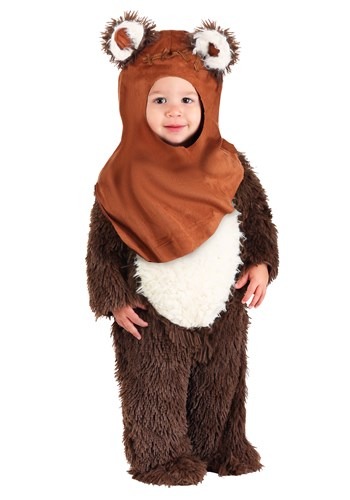 With all the talk about which Star Wars creature or character is the cutest, you’ve made it your mission to end the conversation. Before BB-8 made the scene, R2-D2 wasn’t included in the debates. But with a roly-poly new friend, fans took it upon themselves to create a hierarchy (D-O didn’t make the droid ranking easier). Eventually, the Porgs were added to the conversation. Jawas, Tauntauns, and even Babu Frick got in on the fun. And that tiny green Yoda lookalike loves stealing the show. You, however, have always ignored the noise. You know, without question, that Ewoks deserve the cuteness award, and for more than just their looks.

Ewoks are the original Star Wars cuties. From the moment Leia landed on Endor, Wicket and his village were breaking hearts and saving the galaxy right alongside the rebels. Their gibberish language, shiny eyes, fierce attitudes, and overall teddy bear-like appearance is unbeatable. To prove it, you decided to bring one to life with the help of your baby! They’re just as spunky as Wicket after all. When they talk, it’s complete nonsense, but you can understand most of it without a translator. And of course, your baby is small, a key characteristic of Ewoks.

Make sure your little one earns the top spot for Ewoks in this Star Wars Wicket costume! The simple design includes a jumpsuit and a separate hood to make dressing your baby easy. Wrapped in the super-soft, faux-fur suit, your baby will look as snuggly as the loveable Wicket. Under the velour hood, with attached ears and suture-appliques, their Ewok transformation will be complete, and they’ll keep warm and ready for any Endor and Halloween adventures.

Win One for the Rebellion

Make a definitive statement on Star Wars creature-cuteness with this Infant Star Wars Ewok Wicket Costume! With your little one portraying the diminutive teddy-like character, you can put the debate to bed and complete your Star Wars family group costume. Whether the family is trick-or-treating or heading to a costume party, your little one is sure to win another mission for the rebellion!