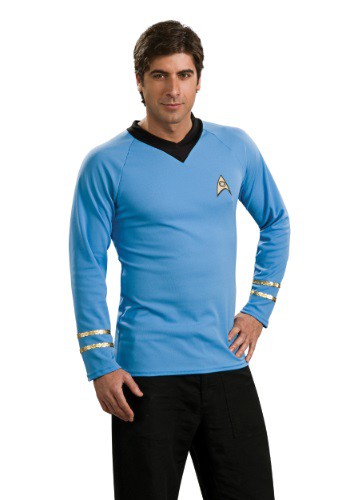 So your name is Spock – your full name is generally considered unpronounceable to Humans – and you’re a Human/Vulcan hybrid who became one of the most distinguished and respected figures in the United Federation of Planets! Sure, some of your shipmates will find your demeanor a little off-putting, but we're sure you'll save their butts so many times that they'll be glad you were on the mission. And Kirk? He probably would have gotten lost in the space dock if he didn't have his favorite Science Officer to give him a little no-nonsense guidance!

It’s a severe understatement to say that you’ve been on a lot of space adventures, but when you’ve been around the galaxy as many times as you have, what’s one more trip, eh? But if you feel like you wanna lend the Federation a little bit of Vulcan logic, you’re gonna need an outfit upgrade! Sure, that shirt you’re wearing is totally classic, but you’ve worn it for 20 years in a row now, and what’s the harm in rotating it out for one that looks exactly like it?

So suit up for duty with this fresh Star Trek shirt and you'll look and feel as good as new! CBS officially licensed, this Star Trek Classic Deluxe Spock Shirt is in the original series style, finally available in our century! Made of 100% polyester, this pullover shirt with a v-neck and raglan cut sleeves will keep your cool while you’re making the crucial decisions you never get credit for! It’s also got an embroidered Starfleet emblem and metallic ribbon sleeve stripes, because what’s the point of being out in space if you can’t have some seriously far-out, from the next galaxy type-a style? Live long and prosper, indeed!