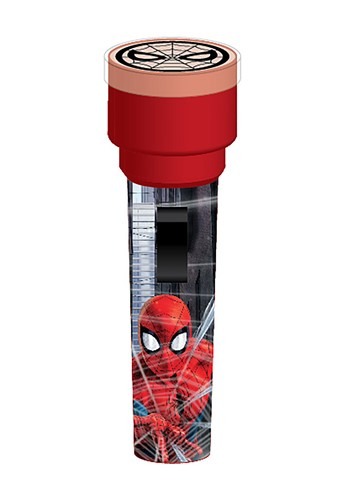 There have been a few different versions of the Spider-Signal. On Earth-616, everyone is familiar with the light Spidey had on his belt to help him bust criminals and the larger one that called him to the Police Station if he was needed. As useful as both were, we think the Spider-Man of Earth-6799 had a better design.

First off, how useful is the Spider-Signal at the police station? Spider-Man had his Spidey-Sense to tell him if he was needed. Second, wouldn’t a light on a belt be hard to use? On Earth-6799, Spider-Man’s Spider-Signal was a simple flashlight connected to his Web-Shooters! So much smarter! He could direct the light wherever he needed it and temporarily blind criminals before swinging away on a fresh web.

This handheld Spider-Man Projector Flashlight may not have Web-Shooters, but it is the next best thing! Illuminate a path through the dark with the bright LED bulbs and signal to your friendly neighborhood Spider-Man with the mask-printed lens with ease. Unlike a high-tech utility belt or massive spotlight, this Spider-Signal is powered by AAA batteries so it’s ready to go wherever you do!

Whether you need to complete a Spider-Man costume or light-up the night, this Spider-Man Projector Flashlight is a bright idea!