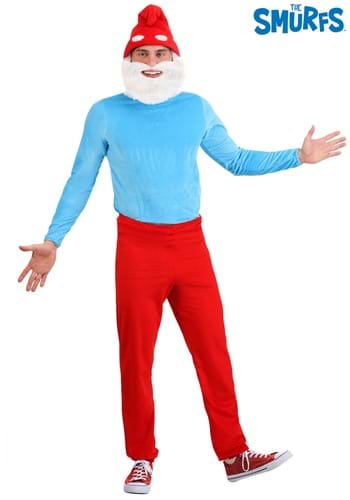 After decades of doing his best to keep his people safe from the machinations of Gargamel and other weirdo issues, the leader of the Smurfs finally had to realize that his shorter stature might have been a problem. When even a failed wizard can still cause a bunch of problems in your village just by stomping around on your mushroom homes, it requires some creative thinking, after all! So, he dove into some of his magical tomes and discovered something to even the odds.

Now, some might think that a requirement of a Smurf is to stand just over a few inches tall (or, more specifically, standing under a foot or so), the only thing that is truly required is a big heart. So, with a few magical phrases, Papa Smurf turned himself into Big Papa! All of a sudden, a human-sized Papa Smurf sprang into existence and he was ready to make sure the rest of his people wouldn't face a single concern ever again! It's time to introduce you to the world.

Show off your Smurfy splendor when you dress up in this officially licensed Papa Smurf costume. This costume was created by our in-house Made by Us design team to help you belt out the Smurf song and feel the fun that everyone's favorite characters always seem to have! The ensemble includes a super-soft blue shirt that zips up the back and gives you the blue skin of the magical Smurfs. The red pants have a blue tail connected to the end and the matching hat features faux fur eyebrows, too! (Don't ask why Papa's eyebrows show through his hat. We don't even know that!) The mustache and beard combo attach to the hat so you can focus fully on your magic!

Sing it in Smurf

We're not sure what kind of magic Papa Smurf used to grow to human size and neither do we know how to revert you back to a shrunken size. What we do know is that you're going to love singing the Smurf Song while showing off your stellar Papa Smurf costume.