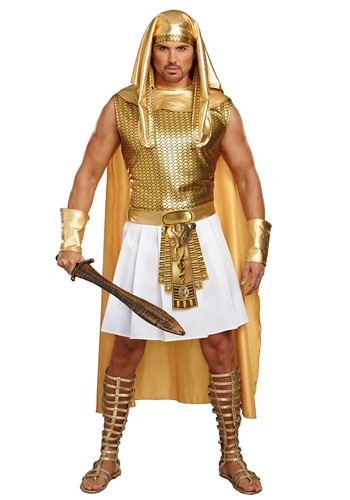 King of an Ancient Realm

We hear all about Greek and Roman gods all the time. We get it. Mount Olympus. Thunderbolts. But what is up with the Egyptian gods? What's going on with those immortal dudes? You might know a few basics. There's Anubis, the jackal-headed fella who judged newly expired souls. Then there's the diva, Isis. She was a boss, a healer and giver of life she also inspired mummies! That's right, without this strong woman there would be no mummies or mummy curses. Now, there are plenty more impressive deities but they all had one thing in common. All the gods were super impressed with all things shiny. That's why Egyptian rulers would dress to the nines at all times. Jewelry, makeup, and golden clothing were the royal standard because a really good outfit was sure to earn the god's admiration. Want to become an ancient royal with divine cred? This costume is a sure way to go!

This golden costume is bright and dignified with a white, pleated kilt. The skirt is known as a shendyt in ancient Egypt but don't you dare ask us how to pronounce that. A panel falls from the waist with Egyptian symbols embossed on the surface. The top has a scale pattern, reminiscent of chain mail. A gold cape hangs from the shoulders and it's complemented with a gold draping headdress. Gauntlets compliment this costume, making you look ready to take on ancient world enemies!

Has a King to It

Ready to take on Ramses' identity? Ramesses II is one of the most famous Egyptian kings. He's known for expanding his kingdom, taking over Canaan and parts of Nubia. This fella even took on pirates. How cool is that? Looking to create the perfect couple's costume? Ramses was married to the iconic queen, Nefertiti! Step out in ancient style when you don the gold splendor of this Egyptian look!