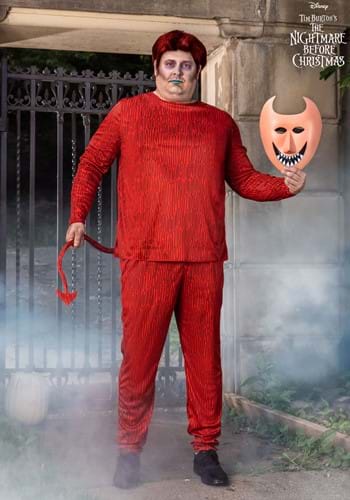 You wanted to be Disney's Oogie Boogie for Halloween. The larger-than-life character, in your opinion, is a better fit. But your Halloween companions, two sneaky little trick-or-treaters had other ideas in mind. (That might have been your doing.) You are the one that showed them Disney Tim Burton's The Nightmare Before Christmas after all.

And when they saw Oogie’s Boys stirring up plenty of mischief (and being the only children around), they were smitten! So, you couldn't say no when they asked to masquerade as the tricky trio. Though, you did ask if you could be the leader of the crew as a bit of a consolation prize.

Make your trick-or-treaters' dreams (nightmares?) come true when you suit up in our officially licensed Disney Lock Plus Size Costume. As the Lock to their Shock and Barrel, you'll be ready to lead the crew into a happy Halloween. And the transformation is made easy with this officially licensed ensemble.

Simply pull on the red jersey long-sleeve top and matching bottoms. Featuring printed sketch lines, the comfy two-piece has an animated appearance that is only emphasized by the attached wired devil's tail. Once dressed all in red, you can slip the foam Lock mask into place to become the devilish darling. Just don't forget to style your hair into two curly horns to really master the look!