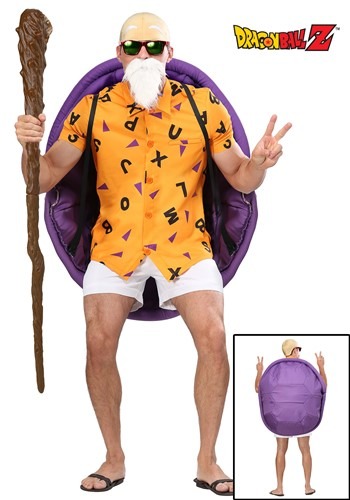 One Shell of a Sensei

Master Roshi has a pretty impressive resume. Throughout Akira Toriyama's iconic Dragon Ball Z anime series, he's accomplished some pretty wild feats. He trained Goku and taught him how to perform the Kamehameha. He blew up the moon during a martial arts tournament. He even competed in the Tournament of Power for the fate of Universe 7. He's definitely a sensei to be reckoned with! Of course, we think his most impressive accomplishment comes in the form of his signature style. He's bringing the turtle shell back!

Okay, so maybe wearing a turtle shell was never really fashionable, but the Turtle Hermit used his shell to help him train. If you want to master the art of Turtle Hermit style, then you're going to need a shell... something that this Plus Size Dragon Ball Z Costume comes with!

Officially licensed from the anime series, this Master Roshi costume is a plus size version of the iconic outfit. It comes with his orange button-up shirt, which features the alphabet pattern seen in the series. The white shorts are perfect for relaxing days at the Kame House and fit with elastic in the waist. The purple turtle shell accessory, which is a must-have for anyone stepping into the role of Roshi, has elastic shoulder straps and fits like a backpack. The costume also comes with a few accessories to perfect your Turtle Hermit look. The bald cap fits on your head and the white beard helps you achieve his signature facial hair. Finish the look off with the included shades!

You'll be ready to train some young whippersnappers in the ways of the Turtle Hermit style when you wear this officially licensed Dragon Ball Z costume! Make sure you practice some special moves though—you never know when you're going to need to perform the Evil Containment Wave!