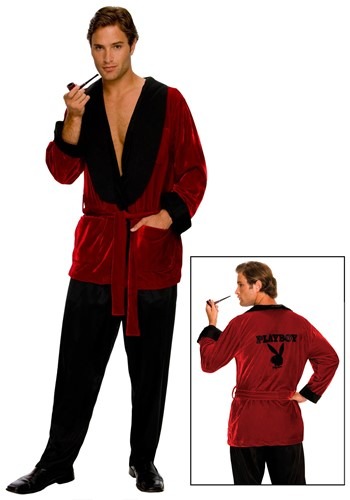 Are you spending hours, literally hours, out of every day trying to figure out how Hugh Hefner does what he does? Do you read book after book and study footage of Hef, hoping to glean some indication of what makes him still such a suave and classy dude after all these decades? Whatever his secret may be, he built the Playboy empire with it, and has a mansion that is almost as famous as he is. But, how does he do it?!

If you look closely, Hef's secret isn't really a secret at all. It's gotta be his classy, debonair sense of style that gets him all those gals, which you can try on for yourself with this swanky official Playboy Hugh Hefner Smoking Jacket. This soft velvet jacket won't instantly grant you a multi-million dollar empire, or a mansion complete with both its own waterfall and aviary, but what it will grant you is plenty of confidence and class, which is all you really need. But, just in case, this jacket also comes with its own pipe accessory to complete the look. So stop spending so much time trying to figure out how Hef does what he does, and just do what he would do, which is to kick back and enjoy the party!