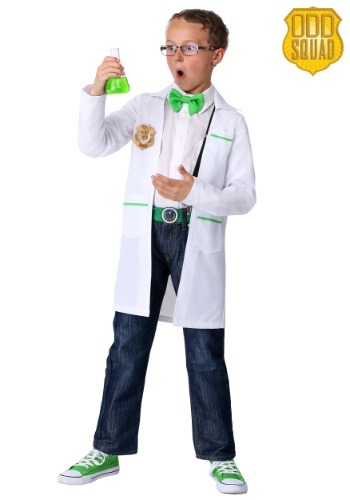 It’s just a matter of time before Odd Todd strikes again! He’s always crafting some kind of wacky scheme to turn the whole world on its head. It’s a good thing that the Odd Squad agents are on the job. They’re ready to solve any problem that those weird villains might cook up. That’s all due to the hard work put in by the Odd Squad Scientists! Kids like Agent Oscar might not be running around in the field solving problems, but he and his dedicated scientists are busy in the lab whipping up handy gadgets to get the team out of any situation.

Just look at this wild list of inventions that they’ve cooked up: the Add-inator, the Before Now Machine, the Centigurp Container, the Cup-inator, the Couch-inator, the Dig-intator, the Day-inator… and, well it’s a lot of “inator” devices. If your child is into cooking up cool new inventions, then they might be a perfect fit for the Odd Squad Team!

This Odd Squad Scientist costume is based on the hit PBS kids show! It comes with everything your child needs to join the team, including a white lab coat, a pair of suspenders, a bright green bow tie, and a green belt. It also comes with an Odd Squad Badge that pins to the lab coat. Just pair it up with your child’s best button up shirt and they’ll be ready to hit the lab!

Newest Scientist on the Team

When Odd Todd tries to terrorize your neighborhood with one of his ridiculous schemes, you’ll be able to rest easy knowing that your child is the newest member of the Odd Squad science team. This costume is a great outfit for any child who loves tinkering with gadgets. Who knows! Your child might invent the next great gadget for the team!