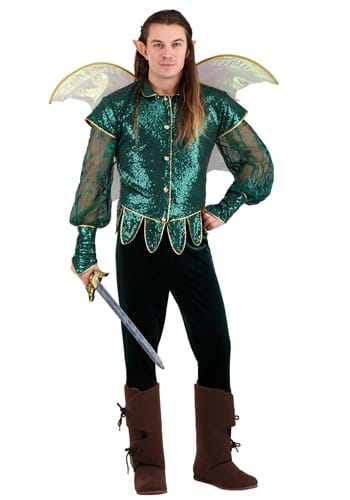 Run! The Fairies are Coming!

We need to get something straight: Fairy legends have evolved over the years into something VERY different from their original inspirations. Back in the day, when the Old World still had pockets of magic, fairies were very different from modern day's Tinkerbell and her sweetly chiming, glittery, flying friends. It wasn't even the same as William Shakespeare's impish woodland dwellers, who talked in verse and liked to put donkey heads on travelers but were mostly friendly to humans. Oh no. If you said the word "Fairy" to any of the Old World's inhabitants from Iceland to Africa, you'd see a tiny start and a side eye, and hear "What? Do you see one? Oh no! Everybody inside!" Because fairies as they were originally known were terrifying magical warriors with whom you did NOT want to mess. Try depicting one of those in a Disney animated musical and see how far you get!

Claim your rightful butt-kicking heritage in this exclusively designed Forest Fairy Costume for Men! You'll truly look the part of a eldritch battle mage in your rich green shirt sewn with kingly gold buttons and trim, and sleeves as sheer and iridescent as beetle wings. Dark pants help you melt in and out of the forest shadows. Mothlike wings attach easily to your back and power you through the air to attack marauding humans and other enemies. Add some sturdy boots and your weapon of choice, and you're ready to cause some real damage!

Sure, the Vikings had their battle axes and the Scottish had Mel Gibson, but fairies had sorcerous powers and a really good grasp of forestry, so there really wasn't much of a contest when it came to humans-vs-fairies combat. Please don't hurt us.