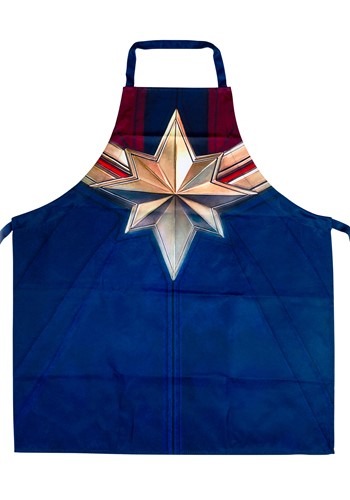 Captain Marvel is one of those cosmic-powered superheroes that has to go solo versus whole swathes of supernatural threats. It's hard enough going one-on-one with a galactic bad guy. But, when you've gotta deal with an entire legion of Kree and other genetically superior creatures, you know things are going to get messy!

Fortunately, you've got your armor to help augment your rugged form. But, how about those creatures that have a particularly explosive personality? Or, more accurately, a detonating dermis!? Yep, eventually, the Kree are bound to send attackers that will literally explode once you take them down. It takes forever to clean off all that green goo!

That's why our team of superhero tech developers have come up with this Captain Marvel Apron. This officially licensed wonder appears to be a conventional apron with fabric ties that'll fit easily over your neck and protect your front. And, well, that's exactly what it does! It's great for cooking around the kitchen as well as keeping you clean while defending the universe. Plus, it already has your Captain Marvel symbols on the front!

We're still working on implementing actual Kree technology so this Captain Marvel Apron will deflect blaster fire. But, in the meantime, you're certain to enjoy gearing up in Marvel form with a quick tie behind your back.