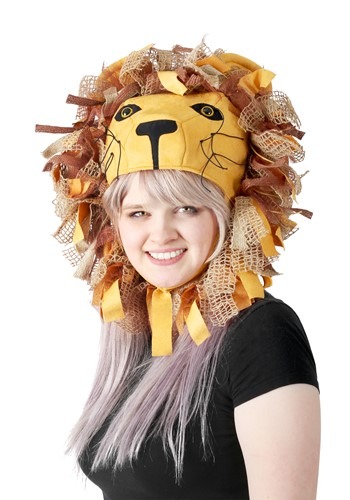 There's a lot of magic going on at a Quidditch match. Not only are the balls enchanted to cause all manner of chaos, but brooms of every make and manner also have wizard zipping from one side of the court to the other in a snap. (Plus, if Malfoy is on the field, you can be sure there are going to be some spells slung to give Potter a run for the win!) But, of all the things at Quidditch, there's one that can be seen and heard from everywhere in Hogwarts. Naturally, that's the comedy gold brought to the game by everyone's beloved Ravenclaw wonder, Luna Lovegood.

Let out a roar of pride to your favorite team (or maybe one of warning to the other guys) with this officially licensed Roaring Lion Hood. This hood is inspired by the one requested by Evannah Lynch for her portrayal as Luna Lovegood in the films. It fastens with a hook and loop strip and has strips of fabric that look like a luxurious lion's mane. Unfortunately, it won't let out a true roar, but you can always supply the cheer yourself!

Nobody expects a Raven to cheer so hard for a Lion that it knocks a Serpent out of the sky. (Then again, not many expect a sentence like that to make sense!) But, when you have this Luna Lovegood Lion Hood, everyone will know exactly how you feel about the game!