Wario Hat and Mustache for Kids 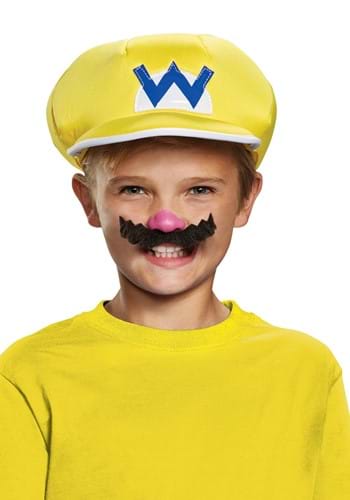 Nowadays we all know Mario and Luigi as adventurers and hero-brothers of the Mushroom Kingdom, but there was a time when they were just a couple of simple plumbers. Or maybe not so simple - the evidence would suggest that these two had one of the flashiest marketing campaigns in the plumbing game. Maybe it’s different in other places, but a pair of brothers with big, bushy mustaches, wearing matching, color-coordinated overalls and oversized hats sporting their own initials? Where we come from that’s going to be by far the most attention-getting plumbing partnership in town.

But those guys are played out! We like Mario's dastardly cousin Wario instead. He rocks yellow and a squiggly mustache and loves, loves, loves his coins. He might not be Mario, but he makes for a cool, instantly-recognized costume!

Showcase your own flair for self-promotion in this integral component of the Wario look: this Child Wario Hat and Mustache combo. It's officially licensed so you don't have to worry about a thing. Just pair it with a yellow sweater and you’re all set to slide down some pipes, bop some goombas, and maybe even rescue a princess or two. Just make sure you scour the site here for other gear, like gloves, you might want to round out the outfit with. If anyone at the costume party dresses as Mario or Luigi, you have a reason to pester and prank them the whole time!