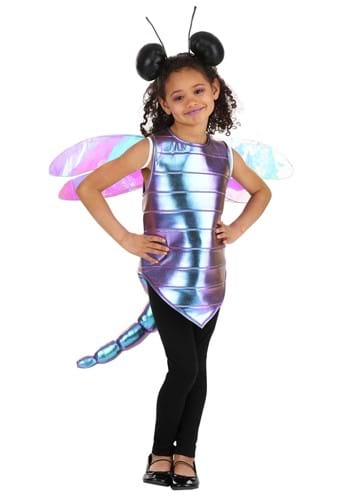 They Really Are Real!

Has anyone ever told you that dragons never actually existed on Earth? Was that someone, perhaps, a boring adult? Don't blame them for being wrong. They just don't know where to look to discover the amazing creatures, which are hidden in plain sight. You may have seen them yourself without even realizing it. They're smaller than you'd think, and they don't breathe flames (at least not when humans can see them), but they have the most beautiful iridescent wings and tails just like the dragons of lore.

No one will be able to take their eyes off of you when you wear your exclusive Iridescent Dragonfly Costume for Kids! The outfit includes a sleeveless tunic made of iridescent lame-covered foam. The front is detailed to look like a dragonfly's torso, and the back is sewn with a shiny polyfilled tail. The holographic wings are attached to comfy elastic shoulder straps. To finish it off, add the matching headband: It features oversized black eyes made of fiber-filled fabric as well as a pair of poseable wire antennae.

Science should come up with a totally new category for the dragonfly. They're technically bugs, but they're nothing like those gross, many-legged centipedes or those annoying mosquitoes, or those creepy spiders. They're more like armored fairies flitting around over ponds and rivers and fields. Wearing this costume may make you feel like flitting around too, since a creature as uniquely lovely as a dragonfly makes an exciting outfit for Halloween.