Kids Cop Pick Me Up Costume 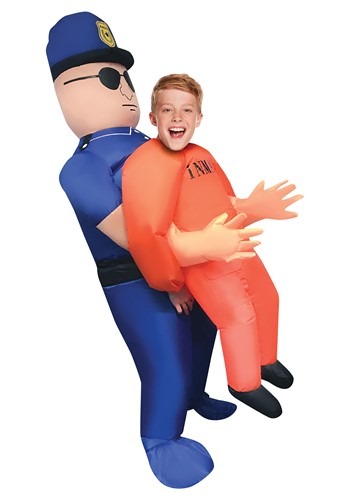 Caught in the Act

Reports came into the newsroom today of a sneaky kiddo that came up with a serious cookie caper. We've all heard about the fire department being called to help fetch cats out of neighborhood trees but it was quite the surprise when a youngster was stuck up there instead! Turns out that hiding the cookie jar on top of the fridge just isn't enough for some families. The newest trend in hiding spots was high in the boughs! But, this hungry tyke wasn't going to be dissuaded just because of a few high branches!

Before long, it seems the kiddo was stuck and the sirens were sounded. Fortunately, the police department's officers were ready to climb their way up and fetch the tyke safely down. The question remains: what next!? Sneaking up a tree for snacks is hardly a recorded offense, so the next plan is a bit up in the air. That's especially true since it seems our baked good bandit still has their eyes on the prize!

If you have a kiddo who has serious plans for tricking their way to treats, keep everything well in hand with this Kid's Cop Pick Me Up costume. This is an inflatable costume jumpsuit that your tyke can step into and activate the included fan to bring the scene to life. Elastic cuffs at the wrist and ankles keep the air contained so this comical copper costume will keep your little criminal having a delightful time. We highly recommend giving your kid a couple cookies beforehand to make the story believable!

If you thought that hiding your snacks would be enough to keep your kids' hands out of the cookie jar, you've got another thing coming. But who knew that this Inflatable Pick Me Up Cop costume would just mean that now they'll be asking for two cookies: one for themselves and one for their police protector!?