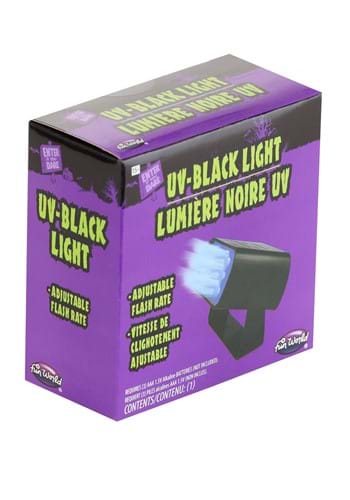 For Dracula’s birthday party last year, we at Halloweecostumes.com gave him this awesome Intense Blacklight. At first he wasn’t sure about it, seeing as how he mostly avoids the light as much as possible, but when he saw it in action, he loved it immediately! He began using it all the time at his castle, and nowadays you can’t go ten feet inside without seeing one. Granted, it has changed the ambience some, since he ditched all his many candelabras and torches in sconces in favor of these lights, but still! We are happy that he is happy.

The best part about it is that he looks fantastic under a blacklight! It really brings out the whiteness of his vampiric fangs and the paleness of his undead, soulless face. The other best part, though, is how horrifying it makes everyone else look. Frankentstein is really not pretty and his constant, yellow-toothed smile shows that he is happy that way. The light really makes the bolts in his neck pop.

The LED lights produce a very even, bright effect that can be taken anywhere. It is battery powered, meaning it is portable and perfect for any location. It also has adjustable blinking speeds, which Dracula uses when he wants that ‘rave’ feel for his house parties. That Drac sure knows how to party!