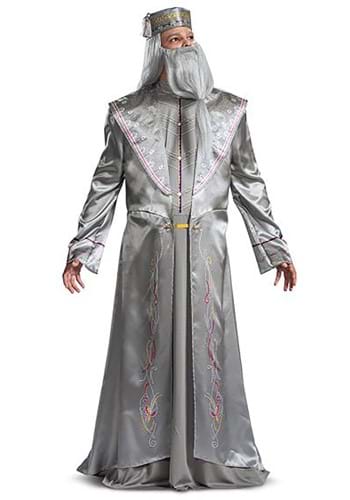 It's hard to have a secret weapon in a world where teen witches and wizards have become the heroes. The eager youngsters are ready to show off their spellcasting mastery and clever potions talents, and they shine while at it! They've shed their Hogwarts school robes even before completing 7th-year. Traded in for fresh fashions, the kids make it nearly impossible to mistake them for anything but the stars of the show. But that's the trick.

Lying in wait, doddering through the halls of Hogwarts, are even more powerful wizards. They're simply disguised. They look past their prime in layers of robes or cloaks in place of crisp suits or posh pullovers. The calm spellcasters pull hats low on their brow, making them look more ready for bed than battle. Ne'er-do-wells, convinced they have just children to contend with, are shocked when the likes of an ancient Albus Dumbledore spring into action!

Adopt the wardrobe of a hero when you add this Harry Potter Dumbledore Deluxe Adult Costume to your collection! The officially licensed ensemble starts with a layered floor-length robe. Gray dull satin fabric composes the interior layer. Its decorative details create the appearance of delicate metallic embroidery and buttons that secure at the base of a high collar. Solid gray satin also shapes the outer robe of the costume. However, its high-shine gives it a silvery appearance in the light. This exterior layer adds to the elegance of the ensemble with print-texture lapels. Additionally, multicolored spirals printed along hems, cuffs, and back add a vintage flair. A small gold ribbon adds a simple clasp at the front of the costume. Finishing the look is Dumbledore's signature flat, tasseled hat.

You'll look like a hero-in-waiting with this Deluxe Harry Potter Dumbledore Costume! Pair up with fellow Harry Potter fans to create a league of powerfully magical professors dressed in our available McGonagall, Hagrid, or Snape costumes. Or get the kids in on the fun with Hogwarts uniforms and everyday accessories that are the perfect distraction from where the true power lies!