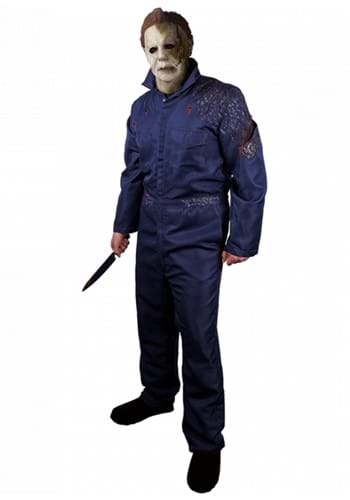 Have you ever wondered how Michael Myers survives all his horrific injuries? The truth is that it’s all about what you think you can do. He has been shot several times, stabbed, slashed, run over, thrown from great heights, and concussed by multiple heavy objects, and yet he continues. Nothing can stop him. That is because he has what they call a “can do” attitude.

He feels the pain of getting electrocuted just like anyone else would, but he thinks to himself, “Michael, are you going to let that debilitating injury stop you? NO!” Then he keeps on chugging, with that characteristic dead, empty look on his face. When he took that knife to the arm that cut a hole into his nice blue coveralls, did he quit? No! Far from it! He took that arm wound and went on with his day. Michael Myers never lets anything stop him and we think that is great. He really is a role model!

Besides the enviable fortitude of his mind, Michael also shows us what great style looks like. Sure, he stole that pair of coveralls and boots from a random guy who he murdered, but that doesn’t mean that he doesn’t rock the outfit! From the tastefully rent sleeve to the tire treads on the shoulder, his alterations are what really make it special.

So, if you feel like things are getting you down, remember Michael. He wouldn’t let something like a car running him over get him down and neither should you. He believes in you and we here at Halloweencostumes.com believe in you too!