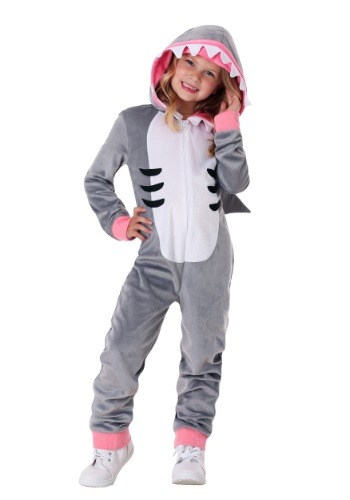 Cozy and ready for naps

So, we were a little startled when we found out that sharks don't sleep. They need to be constantly swimming to keep water moving over their gills, you see, so it seems as though they do "sleep swimming" with parts of their brain resting for periods. Now, as for us, we think full nights of sleep are just the best. And naps too! But if you and your children are thinking about suiting up as sharks this Halloween, there's no reason to worry that you won't have time to find some zzz's. Because when you choose this Girl's Cozy Shark Costume, your child will be so comfortable that she'll be ready to take a nap whenever!

This cute Girl's Cozy Shark Costume is one of the newest costume creations out of our Made by Us costume studios. Meticulously crafted by our team of artists, designers, and developers! It's got extra emphasis on style which shows, and it's made of soft polyester fleece so it's eminently comfortable. Designed as a hooded jumpsuit, it zips up the front, and features eyes and soft felt teeth on the hood. It has a large dorsal fin on the back, along with a white belly and black gills on the chest. It even has pink rib knit cuffs at the ankles and sleeves, for an extra touch of style and comfort!

So, you've carefully considered this costume, and now it's time to start thinking up some plans. Just what do you think your child will undertake when she suits up as the cozy shark? She'll be down for naps and watching Netflix, but she might want to undertake some shark-themed adventures, too. And, last but certainly not least, she'll want to "swim" the neighborhood trick-or-treating on Halloween! She might even find that sharks are particularly great at collecting Halloween candy, which you'll just have to take our word for, they most definitely are!