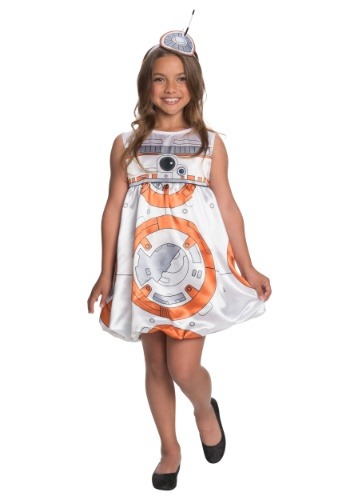 So, when your daughter said that she wanted to be that cute robot from Star Wars you were hoping that she meant C-3PO. Your heart sunk when she clarified, saying that she wanted to go as the roly-poly BB-8. How were you supposed to make your very human shaped daughter into a round robot? Well, you're a good parent so you started drafting plans, a costume as complicated as this one won't show up at your door, right?

Sometimes you have to bend the rules to make your kids happy. Sure, your yoga instructor wasn't happy with you when she found out you borrowed an exercise ball to use as a Paper Mache mold. No one was happy when the paste and paper ball kept escaping your clutches and rolling all over the floor. You finally cut arm, leg, and head holes painted BB-8's orange and gray details on the body and stepped back to admire your work. You wondered if your daughter wouldn't prefer to go trick-or-treating as an old orange that has been squished and growing mold at the bottom of someone's gym locker because it seemed like that was what you had created. Now, if we lived in a time before the internet, that would be the end of that, however, those dark times are behind us. Your daughter deserves to be more than a moldy orange for Halloween, she deserves this super cute BB-8 dress.

Whether you and your family are doing a Star Wars group costume or your daughter is a solo robot, she'll love this simple bubble dress printed with the round robots recognizable details. When she puts on the matching antenna headband the look will be complete. She could even have some sound effects ready on a phone so she could communicate with BB-8's adorable beeps and squeaks. Well, we're glad it worked out, turns out you don't have to work on those Paper Mache skills, after all, costumes this cool can just show up at your door.