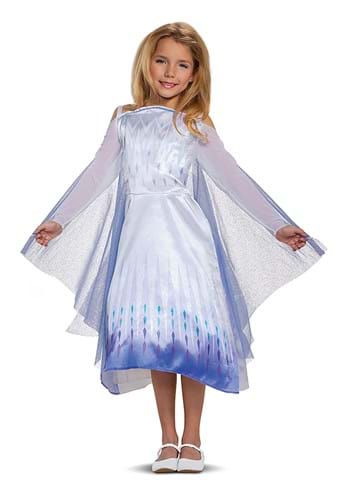 Here's the truth: we don't even think Disney knew that Frozen would become the phenomenon it is today. We're guessing they sat there and thought—here's a cool story. Little kids are going to want to watch it. And now, 7 years after the original, it seems that kids' love for Frozen will never melt away. Ever. Don't worry about it. It's a phase! Just let it go...and give your child an opportunity to turn into their favorite character from the film.

Your little Frozen fan is inevitably shopping for one costume and one costume alone—Elsa. And now you need not look any further than this Kid's Frozen Snow Queen Elsa Classic Costume. It has everything a Frozen fanatic could ask for. In fact, we think this costume may have staying power long after Halloween is done. Add it to your kid's dress-up closet for hours of imaginative play and re-enactment of their favorite scenes!

We don't know too many kids who wouldn't want to turn themselves into the Snow Queen, and in this costume, it's easy to see why! It's Elsa's signature look, with a satiny dress that fastens in the back. The gown has ribbon straps for an off-the-shoulder look, and a delicate, sparkling tulle cape attached to the neckline. Printed snowflakes and ice crystals mimic Elsa's from the film, for a spot-on transformation.

Now that they look the part, your child will just need to memorize "Let it Go," and...HA! Just kidding, they did that (along with the entire film) on the second screening!