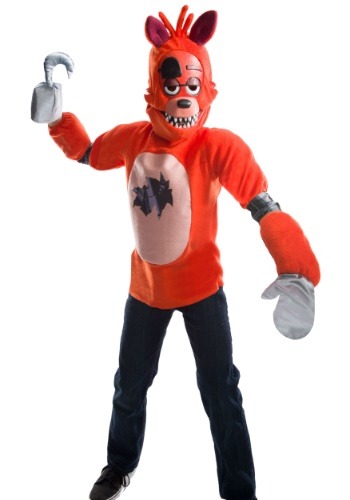 We like Foxy. Sure, he might run through the halls like a maniac and if he ever happens to catch you while you’re loitering round in Freddy Fazbear’s Pizza, but we think behind that malicious pirate exterior the heart of a misunderstood animal beats. Just think about it for a second…

He’s a fox. Not just an ordinary fox, but one who has quite obviously led the life of a quite successful pirate—you can tell by the eye patch and hook hand. Then, those crazy people at Freddy Fazbear’s Pizza made him sing and dance with the rest of the crew while people ate pizza all day. That would be enough to make just about anyone angry enough to say… run down a hallway in a rage! Perhaps he just needs a little PR work and perhaps your young Five Nights at Freddy’s fan is the perfect new spokesperson for Foxy!

Now your child can spread good vibes with this deluxe Foxy kids costume from the Five Nights at Freddy’s video games. The costume is quite creepy (as Foxy is), but we think with a slightly more friendly temperament, your child can still help make a few new Foxy fans. It comes with a bright orange top that has printed mechanical details on the front and along the sleeves. It also has a mask that is sculpted to look like Foxy’s face, complete with an eye patch and molded white fangs in front. It even comes with a pair of gloves, one of which looks like his signature hook hand!

Once you have your little rapscallion dressed up in this licensed costume, he can finally help clear the name of poor Foxy.