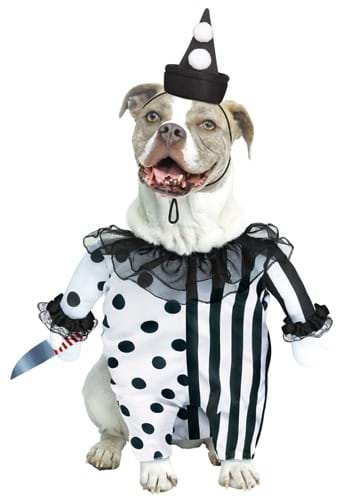 If you ask us, we think horror movies have gotten a little obvious. A clown lingering on the edge of the woods? Well, of course, he's the baddie! And for some reason, people don't just get the heck out of there, go home, and lock their doors. But we're not willing to give up on the genre. What we want to see is a twist. Something that would make people think twice then overcome their original trepidation. Spooky children and even grandmothers have done that job in the past but both of those characters would still creep us out. The only way we wouldn't run if a murderous character suddenly showed up on the edge of the woods while ominous music was playing would be if that eerie character was a happily panting puppy. Sure, that dog might be dressed as an unhinged clown and carrying a knife in its little paws, but who can say no to those big ol' puppy eyes?

Helping your dog transform into an evil clown is easier than you might think. The clown suit fits around the neck of your puppy, with the paws going where the clown's feet would be. Stuffed hands on the sides will make it look like your dog is a short little clown, walking around on two legs. The costume is topped off with a conical clown hat for an extra silly yet spooky touch.

Some clownish pups will love the extra attention that comes with putting on a costume. But if we're going to be honest, for some dogs, it's a circus. Make sure you prepare your pup before clowning around. Bribe Fido with plenty of treats and try on the costume long before the main event. For more tips, check out our pet costume blog. Love the way your canine clown looks? Tag us on Instagram and we'll flaunt Fido on this page!