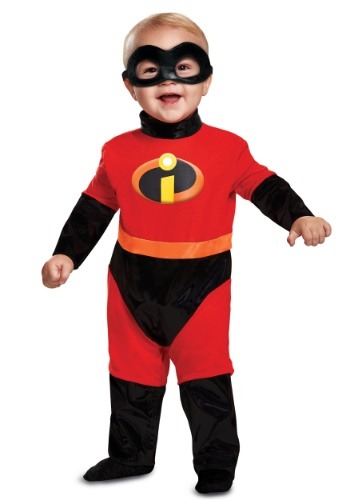 Genetics is genuinely a fascinating thing that many people don't readily think about. You take some chromosomes here and some chromosomes there, mix them together, add some—well, okay, we'll be honest, when it comes to costumes and collectibles, we know our stuff, but biology isn't our strong point (it sounds like we're making a weird cake). Either way, genetics is still fascinating. Take Jack-Jack, for example. His mom's superhuman ability is that her body takes on elastic properties. His dad has super-strength and stamina (he uses trains as free weights, jeez). His sister Violet has invisibility and force fields, and his big brother Dash has super speed. This is a classic example of our DNA being passed down to our kids. On paper, Jack-jack should have gotten either one, both, or a combination of his family's powers but has powers all his own. Extrapolated, Jack-Jack is probably the most potent member of the family as he can do pretty much anything, as shown on The Incredibles 2.

Every generation learns from the age before them, so make sure your baby has a great start to their superhero training with their very own Disney Incredibles 2 Classic Baby Costume. The mask has an elastic band to hold up against kids' curious fingers (if they try to take off the mask, tell them that they have to keep their identity a secret—superhero 101). There is a hook and loop fastener on the back of the jumpsuit and at the crotch for easy access if somebody has an accident while saving the day. Since this costume is officially licensed, the Incredibles logo is printed on the chest. Kids are a miracle, and you never know how they will turn out genetically, but with this costume and your good guidance, your toddler can be a superhero. Oh, and get a Halloween costume for yourself the rest of the family to set a good example.