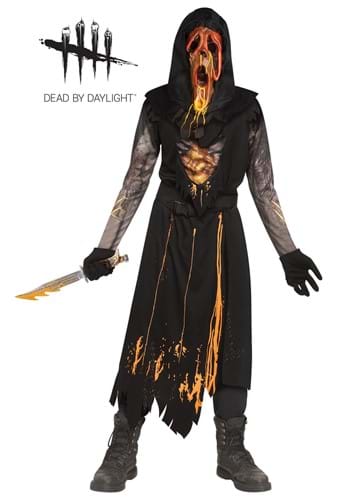 A Scream in the Night

The small, sleepy town of Roseville has been rocked to its core. Formerly a little city whose greatest claim to "fame" was its adherance to good, old-fashioned American values and the pie-eating contest on the Fourth of July, it is now the site of several gruesome murders. An unknown killer has been breaking into homes, surprising his victims and stabbing them to death. Once, he was even caught on security tape, haunting mask with its wide-open mouth and hollow eyes turned toward the camera, but no one knows who he is. Once, a victim appears to have wounded him with a lighter, giving him severe burns and scorching his mask. Now, the killer roams the streets in the melted face covering...planning his next crime.

If Dead by Daylight is your child's jam, he or she will enjoy the spooky thrill of dressing in this officially licensed Dead by Daylight Scorched Ghost Face Costume for Kids! The shirt has a creepy, shadowy look thanks to the mix of dark gray and light gray along the sleeves. The shin-length tunic has a slashed and jagged hem and is decorated with gold detail that looks like melted wax. Two belts made of webbing fasten around the waist and make a great place to stash your weapons. Wrist-length black gloves keep you from leaving fingerprints at the crime scene, and the terrifying Ghost Face mask includes a fabric hood to completely obscure your true features.

Who will save Roseville from Ghost Face? Is it the police? Is it that new reporter with the Roseville Gazette who seems to know more than he's telling? (Hint - it's probably not him). One thing's for sure - you'd better arm yourself and lock your doors while Scorched Ghost Face is on the loose!