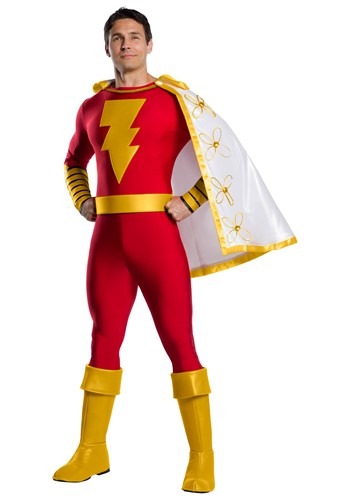 WHAT'S IN A MAGIC WORD?

Most know that the modern, magical marvel, Shazam, is a young kiddo who can turn into a powerful Superhero able to go fairly easily head to head against Superman and near anything else in the universe. But, there's a lot more to this magical phrase than is immediately obvious. First, while the word was always the same, his name wasn't! There was a long time that he was called Captain Marvel and hung out with the Marvel Family. But, perhaps due to a naming conflict with a certain other comic book giant and the help of the Flash changing the time/space continuum, he became Shazam!

But, that's not all. Shazam isn't merely a magical phrase and name. It's actually made up of the names of several other gods and legendary warriors that all lend their strength to the defenders of the Rock of Eternity.  He gains his wisdom from Solomon, his strength from Hercules, his stamina and virtual immortality from Atlas. You can see where this is going! The Z stands for the lightning, sorcery, and healing that he gains from Zeus and his invulnerability comes from Achilles. Last, his flight and super speed comes from Mercury.

Now that you know where the word comes from, it is time to call out the magical phrase and don your mighty look with this Classic Shazam costume! It includes the red jumpsuit with the yellow lightning bolt emblem. A yellow waistband and boot covers would probably finish the look, but the white short cape with yellow accents is a mainstay of this magical superhero.

It might not happen as quickly or with as much a light show as when Billy says, "Shazam," but this costume is going to have you looking and feeling like you just got struck by some awesome lightning!