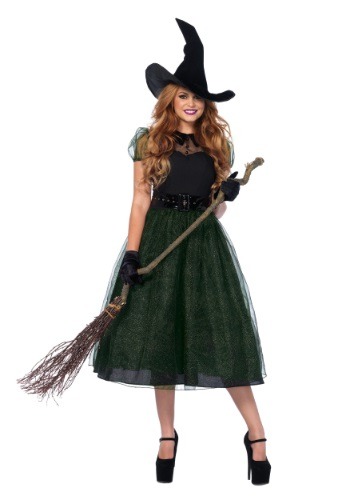 The mortal world has long been speculating about the practices of witches in the deep woods as they engage in their ancient rituals. You’ve no doubt heard the claims. Nudity!? The belief is that the whole mess of witches in the area travel all throughout the wood just to get to a secret location and then get rid of their clothes and dance under moonlight and next to a massive bonfire… as though that is how true power is acquired. If that’s all it took, let’s face it, almost all of us would have claimed the ancient power of witchcraft by now! All witches know that the Moonlight Festival and associated naked dancing is a invitation-only event and the only way you get there is by impressing the Witches’ Council at the ball.

No, there is a social pecking order even in the witches’ world. It isn’t enough just to show up with the right cauldron. There is a hierarchy to be established and, just like in the world of socialite mortals, it comes down to wearing the right garb. And, when it comes time for that Moonlight Festival and Witches’ Ball, you need to be sure that you’re on top of the gown game. Your typical woodland gown and old crone cap won’t cut it.

Fortunately, your charmed familiars have been hard at work and have crafted this spectacular Darling Spellcaster Witch costume. The back zippered polyester dress has a gossamer velvet collar and a sophisticated organza sheer in front. Glittered puffy sleeves have give you a sort of Good Witch of the North appearance that contrasts well with the more conventional Western color and styling while the faux leather belt keeps your mortal upbringing and conservative feet firmly on the ground. (At least until you acquire an optional broom to help you defy gravity.) The classic cone-shaped velvet hat completes your enchanting look and ensures that you are perceived as the elite bewitcher amongst your grand peers. If you’re not granted a leadership position in the council, you can be sure that you’ll at least be among the first invited to the Moonlight Festival. Heck, you might even want to defy tradition and wear this to that, too!