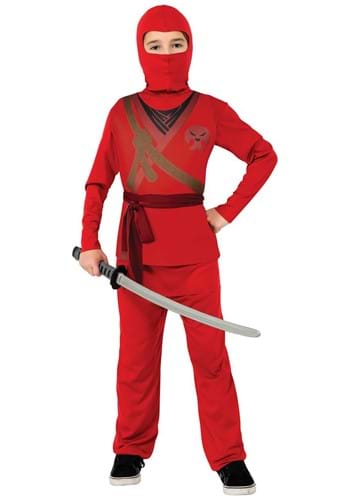 Ninjas are highly trained fighters. They practice for years until they can be faster than a hummingbird, deadlier than a cobra, and quieter than nightfall. They're usually shown dressed in black, but here's the thing: When you have that kind of training, it doesn't matter what you wear because you'll reach your target, finish your mission, and get away before anyone can see what you look like. With that skill set on hand, you could wear a clown costume and still be great!

Strike when they least expect it in this Red Ninja Costume for Kids! The outfit includes a bright red, gi-style top decorated with cool graphics, including a golden shoulder "sash," undershirt details, and a stylized skull on the left side of the chest. A red sash ties around the waist. Matching red pants end at the ankles. The red hood covers your head, neck, and lower face, leaving an opening for your eyes. A ninja's secret identity is almost as important as his weapon!

Red Is the New Black

The color you wear isn't what makes you stealthy - it's your mastery of sneaking around that keeps you from being detected while you take out the enemy! Hopefully that translates to freeing that bag of candy from the top shelf in the pantry. You know it's hiding back there: It's just going to take some specialized moves to get it down. Maybe wearing your ninja costume will help get the job done.