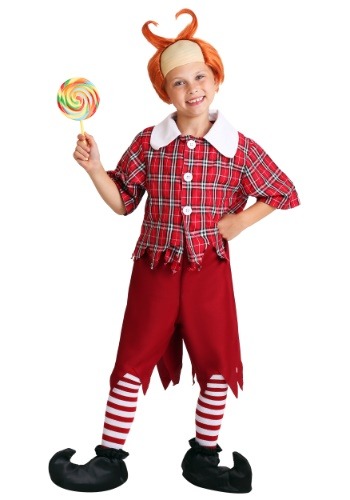 You have been calling your kid “munchkin” since his toddler years--but now that he’s seen the film that started his nickname, he can’t wait to embody it. That’s almost as sweet as a really ridiculously huge lollipop!

He is your special little guy, and his costume should make him feel just that! Now he can sing and dance as a part of the Lollipop Guild in this Child Red Munchkin Costume this Halloween. And he won’t even have to move to Munchkinland (which is good, because he doesn’t know how to cook or do his own laundry...so he’s probably not ready to leave home full-time). And you have to admit, he looks pretty darn cute dressed as one of the jolly little people of Oz. We wouldn’t be surprised if this becomes his typical weekend look; once you learn of the joys and fun of being a munchkin, you’re not apt to give it up the other 364 days a year!

Make sure you pick him up a jumbo lollipop (another sign of your true affection) and the matching wig to complete this cute ensemble, which includes the red plaid shirt, red, jagged-edge pants, and red and white striped socks. Oh, and we recommend a pair of munchkin-approved shoes, as well, because wearing this with his kicks may ruin the illusion for him. He’s always been your beloved munchkin, now he can be the neighborhood’s, too, as he trick-or-treats his way into everyone’s hearts.