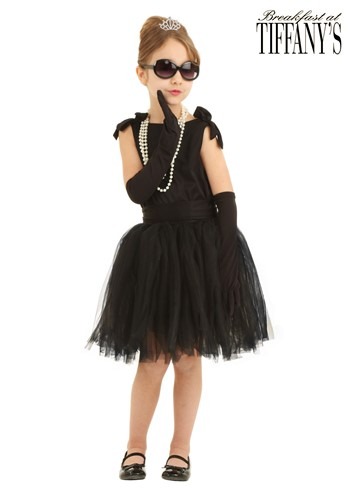 For the kid who has a love of classic Hollywood films, there may be no bigger and more beloved icon than Audrey Hepburn (heck, that applies to movie nuts of all ages!). But one character she played, in particular, stands out above all the rest, and rivals any other screen legend in any decade. Naturally, we're talking about none other than Ms. Holly Golightly from "Breakfast at Tiffany's"! Who doesn't know that sparkling tiara, the black dress, the pearls, and the black satin elbow-length gloves? That's why your daughter will be absolutely recognizable as a rising star in this child Breakfast at Tiffany's Holly Golightly costume!

Made by us, this exclusive and officially licensed outfit has everything she needs for an instantaneous transformation into Hepburn's most legendary role. It includes a casual but fancy-looking black tank dress that slips right on (because someone named "Golightly" shouldn't have to spend hours fussing with a complicated costume!). A black waist sash adds that bit of sophistication and class, and yes, those long elbow gloves are included as well! The costume even comes with a pair of cat-eyed sunglasses that capture the look and style of the ones Hepburn wore in the movie.

Your kid is sure to steal the show in our wonderful child Breakfast at Tiffany's Holly Golightly Costume. Just don't forget to add the tiara (which we happen to sell!), and if you're going for a movie-themed group costume this Halloween, check out our wide selection of cinema-inspired costumes and accessories!